ORIGINAL ARTICLE: A photo of this transphobic message on a reader board hit the internet about two months ago. It drew additional exposure when a GOP politician (rightfully) ended up in hot water for sharing a photo of the sign on social media. The coward that created the sign is apparently still unaccountable for his actions because, as of a few weeks ago, the sign was still up.

I took a closer look at the reader board and noticed that the sign included the names of two companies — one of which I was familiar with. Further investigation revealed that both companies are owned by Larry Lemmons, the son of the founder, John Lemmons. The companies, Lemmons Trucking, and Pacific Fibre Products, are based in Longview, Washington. They also have perhaps a half a dozen other locations in the northwest. The sign, a huge one by the way, is located on their property in Longview.  This was confirmed by a visual inspection. In fact, the sign is located in a prominent spot along a busy truck route and pretty much can’t be missed.

Based on figures off the internet and cars in the parking lot(s), a conservative estimate for total number of employees for the two firms owned by Larry Lemmons is 100. Its safe to say that more than a few employees are negatively impacted by the message on the sign. Unfortunately, unless one of the employees is actually transgender, there is likely nothing illegal going on here. The owner of this business is free to speak his mind on a reader board. He gets away with it because it doesn’t hurt his wallet. He has no storefront and no walk in customers. His customers are other big businesses, most of whom will never see the sign. My own inquiries about the sign were ignored.

Means of holding this particular transphobic business accountable are fewer than usual, fortunately, knowing what I know about trucking companies, I believe we’re holding a trump card: Dispatch’s phone number (360-636-5191). That phone is manned after 8 AM. Unlike other businesses, they (usually) can’t let calls go to voicemail. As an additional bonus, during the day, especially early mornings, the stress factor is higher in dispatch than anywhere else in any given business. I didn’t even have to dig too deep to find the number — they posted it on their website: “Please feel free to call our friendly, professional dispatchers at 360-636-5191.”

Update Aug. 10, 2016: Sources say they’ve been hanging up when receiving calls about the sign with some saying “it’s free speech” before hanging up. I’ve got a line or two on who some of their customers are, but I really need to confirm them. But it’s really a matter of time. Those trucks are easily spotted as are where they dump their loads.

I did manage to confirm some business and charity associates of Larry Lemmons and Lemmons Trucking. They may or may not also be customers. Mr. Lemmons is not listening to us, but he might listen to associates. If you contact any of the people below, please ask them to educate Mr. Lemmons about the harm he is doing to transgender kids and adults by mocking them in this manner. You may have to educate them as well, but virtually all of them deal with the public directly and could benefit from your wisdom! 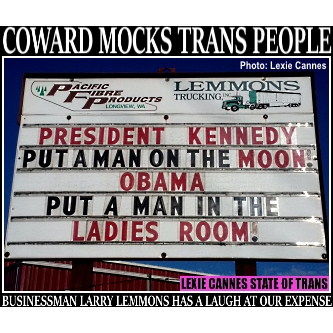