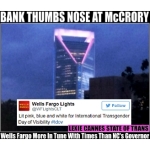 “. . . To my mind, it’s an attempt by people who cannot stand the progress our country has made in recognizing the human rights of all of our citizens to overturn that progress. Right now, there are many groups, businesses, and individuals in North Carolina working to oppose and overcome these negative developments. Taking all of this into account, I feel that this is a time for me and the band to show solidarity for those freedom fighters. As a result, and with deepest apologies to our dedicated fans in Greensboro, we have canceled our show . . .”

ORIGINAL ARTICLE: Gov. Pat McCrory at a press conference last week: “We have not taken away any rights that have currently existed in any city in North Carolina.”  A reporter later asked a transgender rights question related to the new law and McCrory complained he was being blindsided and refused to answer.

Blindsided?!! This, from the very same governor that signed the special one-day session anti-trans bill that blindsided every single transgender citizen living in North Carolina? Yes, that one.  Politifact.com aptly summed up the whole political mess in their rating of McCrory’s claim as False.

Although the following sh*tstorm was swift and thick, at this writing, McCrory is still sticking to his guns. He claims that his state is a target of a “vicious, nationwide smear campaign.” (Source: Wall Street Journal.)

Here’s just some of the fallout pouring down on McCrory:

The American Civil Liberties Union and Equality North Carolina has filed the first legal challenge against the bill in the form of a lawsuit.

North Carolina state Attorney General Roy Cooper said he would not defend the anti-trans law in court: “Not only is this new law a national embarrassment, it will set North Carolina’s economy back if we don’t repeal it.” (Source: Raw Story)

In defiance of McCrory’s ideals, Wells Fargo lit up a 48-story Charlotte skyscraper in the transgender colors.

States and cities across the country have issued travel bans. Among them, the states of New York, Vermont, Connecticut and Washington. Cities include, New York City, Seattle, Boston, Portland, Washington DC and San Francisco. McCrory found himself feuding with New York Gov. Andrew Cuomo and Connecticut Gov. Dannel Malloy following their travel ban announcements. McCrory said of the bans: “demagoguery at its worst.” The travel ban has already resulted in numerous cancellation and rescheduling of events to outside of North Carolina. (Source: Washington Blade, ThinkProgress and others.)

Likewise, some businesses planning to operate in the state in the near future are now reconsidering their plans. This includes a $25 million investment by Braeburn Pharmaceuticals, and future productions from A+E Studios and Lionsgate Entertainment. The latter canceled one production already and will it shoot up in Canada instead. Executives of major Hollywood studios are among those who signed the letter to McCrory. (Source: Charlotte News & Observer)

Presidential candidates Hillary Clinton and Bernie Sanders have publicly opposed the new law. Among other mayors, Rahm Emanuel of Chicago urged businesses to relocate to their cities. (Source: The Advocate.)

The Obama administration is looking into whether the law renders North Carolina ineligible for federal funding on schools, housing and highways according to the Seattle PI. McCrory previously stated that the law does not jeopardize the billions North Carolina receives yearly from the federal government, but if a review finds otherwise, the pressure to repeal the law could increase significantly.

A recent report in the Charlotte News & Observer noted that medical professionals in the state are now starting to line up in condemnation of the state’s anti-trans law, noting the now enhanced risk faced by transgender kids and adults.

North Carolina furniture tycoon Mitchell Gold ripped the governor and state legislators on cable television: “Even though I’m a business person, this legislation is not just about business. This legislation is about, what if you’re a fifteen-year-old kid, you’re struggling with your sexual orientation, your gender identity, and now on the news you have to see politicians, people you should be looking up to, the governor, you have to see these people talk about how you are broken; how you are not fit to use the restroom that you want and have that personal dignity; how you aren’t protected in the workplace…it’s outrageous, that young kids should have to go through this kind of turmoil in life and see that from their leaders.” (Source: Towleroad)

Stay tuned, maybe something will get flushed.

South Dakota’s governor dodged a similar sh*tstorm by vetoing his state’s anti-trans bill over a month ago: https://lexiecannes.com/2016/02/17/update-sd-governor-vetoes-bathroom-bill/ 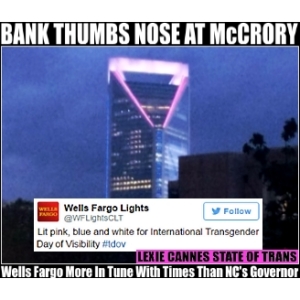 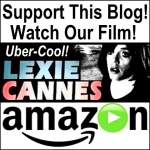