Justice Antonin Scalia is dead; Our long national nightmare is over!

LEXIE CANNES STATE OF TRANS — Yes, I’m quoting Gerald R. Ford here because Scalia’s death impacts our country in the same way as did the resignation of Richard M. Nixon. I don’t take joy in learning about someone’s death, but appointments to the Supreme Court are for life. It takes a death to celebrate a change in the direction of the court, so I’m not going to apologize for that.

Scalia: “If we protect gays, why not child molesters?”

The celebrating is not just for trans/LBGT people — a wide swath of Americans were negatively affected by the views of Scalia — black, poor, women, you name it — the list is long. The ONLY people that stood to gain if Scalia had his way were old white men. And bigots. And now their champion is dead.

The Supreme Court is the ultimate arbitrator of, among other things, all laws passed in the United States. And we’ve seen they also decide elections and turn corporations into people sometimes. Bathroom Bills? They’ll ultimately decide those, too.

Which brings me to this point — the importance of voting. As we will see in the days ahead, selecting a replacement is no easy task — the Republicans have a say in the matter as Democrats don’t control Congress. As this drama unfolds, it should become more and more clear that ultimately, we’re picking our presidents for the job of appointing Supreme Court Justices. In the grand scheme of things, everything else is secondary — Reagan’s real legacy was Scalia, and he didn’t die off until yesterday — 28 years after Reagan left office.

Lets not become unglued over Democrat party squabbles — just vote for one or the other, then in November, show up on election day and help return Congress back to the Democrats — there are 4 other justices on the court that are not so quite aligned with us — and that needs fixing.

The following are links to some of Scalia’s LGBT misdeeds: 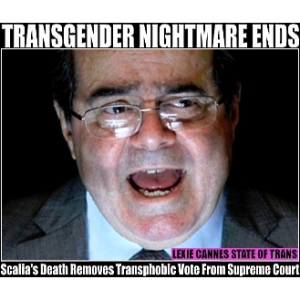 Like Loading...
‹ Noted trans activist attacked on NYC subway; Attacker being sought
My selection for the Democrat presidential nominee in 2016 is . . . ›