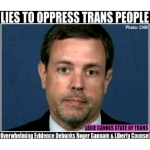 LEXIE CANNES STATE OF TRANS — Proponents of “Bathroom Bills” are primarily using a “predator-in-a-dress” fear mongering tactic to scare parents and citizens into supporting anti-transgender legislation — something many would not otherwise support had they known they were being lied to.

Here’s a typical comment — by Roger Gannam of trans-hate group Liberty Counsel in opposition to a proposed trans equality ordinance for Jacksonville, Florida:

“Most insidiously, male predators will use the legal cover of female “identity” to gain unchallenged access to women-only bathrooms and dressing rooms.”

Media Matters, a media watch group, researched other Florida communities that adopted similar trans/LGBT equality laws to see if there was any truth to the predator claim. They asked of local officials if the LGBT non-discrimination ordinance resulted in increased sexual assault or rape in women’s restrooms or if they’ve seen any examples of a man pretending to be transgender in order to sneak into a women’s public restroom?

Atlantic Beach city manager: “. . . no activities such as those you describe below have occurred in Atlantic Beach.”

Atlantic Beach police department: “. . . we have not had any reports of this occurring.”

Dunedin director of human resources: “. . . there have not been any complaints or reports of sexual assault . . .”

Gulfport mayor: “[S]ince passing the human rights ordinance, we have not detected any of the problems that you mentioned . . .”

Gulfport police chief: “We have received no complaints of the nature you have described . . .”

Gainesville police spokesperson: “I have asked around, and none of us can remember any incidents related to the ordinance.  I have been with GPD since 2005 . . .”

Miami-Dade County police: “. . . we do not have any crimes indicated that pertain to the requested information.”

Monroe County domestic abuse shelter: “. . . it does not appear that Monroe County’s LGBT non-discrimination ordinance has resulted in increased sexual assault or rape being experienced in women’s restrooms.”

Orange County sheriff: “. . . regarding your question, as to:   1. “… increased sexual assault or rape in women’s restrooms?” No.   2. “Has Orange County seen any examples of a man pretending to be transgender in order to sneak into a women’s public restroom?” No.”

Orlando police spokesperson: “I asked our sex crimes division and they do not have any reported incidents.”

Palm Beach County sheriff: “We have not experienced a problem with anyone being sexual assaulted or raped in a women’s restroom . . .”

Media Matters also reports that similar findings was the result of research in 15 other states as well as in a number of cities in Texas.

The evidence is overwhelming, but opponents of trans equality will continue to make bald-faced lies. Instead, present this research evidence to community leaders and citizens of the locales targeted by hate-groups.

A number of states are once again proposing Bathroom Bills, including Indiana: https://lexiecannes.com/2015/12/26/first-2016-bathroom-cop-surfaces-positive-trans-progress-in-nyc-nc-and-california/