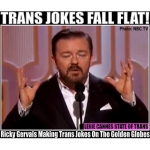 LEXIE CANNES STATE OF TRANS — It was instant cringing for me when the Golden Globe Awards host Ricky Gervais began his opening monologue by joking about Caitlyn Jenner and actor Jeffrey Tambor and his transgender character in the TV series Transparent. But surprisingly, it was an awkward for everyone else as well. The audience response to the trans jokes was lukewarm, and remained that way until Gervais finally moved off the topic and the audience let out a sigh of relief.

The rest of the monologue went considerably better for Gervais, and the audience’s reaction was several notches louder.

I’m not going to make that prediction, but do see many comedians drawing a line through “trans jokes” after Gervais’ flat performance on network television.

Gervais during the monologue:

“But as I say, I’m going to be nice tonight. I’ve changed. Not as much as Bruce Jenner, obviously. Now Caitlyn Jenner, of course. What a year she’s had. She became a role model for trans people everywhere, showing great bravery in breaking down barriers and destroying stereotypes. She didn’t do a lot for women drivers, but you can’t have everything, can ya? Not at the same time. … Yes. Yes. That is the level. An old man pulling me off. Again. Um, at least Jeffrey Tambor did it in a dress. Um, what a year he’s had. Oh. What an actor, what a role. Every day, he has to put on all that women’s clothes and the hair and makeup and let people film it. That takes balls. So, I don’t know how he does it. I really don’t. I’ve seen his balls. They are huge and long. I don’t know he tucked them in the bra, that thing push them out the back and let them hang out, like a bulldog? No one knows. I love Jeffrey Tambor.”

I recently wrote about Jeffrey Tambor and Transparent: https://lexiecannes.com/2015/09/21/we-have-a-trans-civil-rights-problem-overwhelming-public-support-following-emmy-speech-crashes-trans-rights-website/