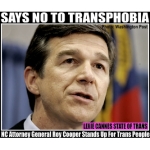 LEXIE CANNES STATE OF TRANS — Around a half a dozen anti-trans “bathroom bills” were considered in state legislatures during 2015 and all failed to become law, although some came close to succeeding. Proponents, however, said they would be back and in Indiana, Republican state Sen. Jim Tomes is first out the gate with a Bathroom Bill: “If you were born a man, then you are obliged to use the males’ restroom.”

According to the Chicago Tribune, Tomes says he’s “not trying to single-out anybody or destroy anybody.” But Lambda Legal’s Camilla Taylor responded with: “That is the most disingenuous statement I’ve ever heard,” noting that Tomes proposed bill specifically singles out trans people.

In North Carolina, Attorney General Roy Cooper fired back at Republican governor Pat McCrory this week for attempting to use the state’s AG office to oppress trans people in another state. Cooper refused to go along with the scheme leaving the governor having to do it himself. Cooper believes the governor is only doing this for political gain.

Cooper’s spokesperson Jamal Little: “This week, [McCrory] found another group to politicize. Adolescence is hard enough without being bullied by an elected official. Next week, who knows who’ll be the target of a governor whose only path to re-election is dividing North Carolina.” (I wrote about McCory’s actions last week.)

The New York City Commission on Human Rights earlier this week put in place rules employers, landlords and businesses must follow when addressing transgender people. Refusal to use the employee’s preferred gender pronoun can result in fines of up to $250,000. The rules also apply to bathroom use and is enforceable regardless whether the person has changed their name or had surgery. The rules includes fairness with dress codes, accommodations and employment benefits.

In California, Bathroom Cops failed to meet the signature requirement for their proposed ballot initiative to ban transgender people from using restrooms in government building that didn’t match their birth gender. There has been a number of attempts to put restrictions on access for trans people, both in the state legislature and through ballot initiatives in recent years — all have failed. 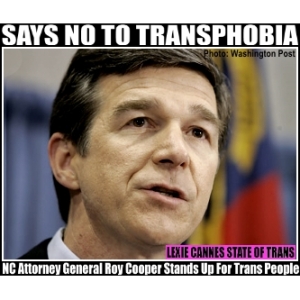