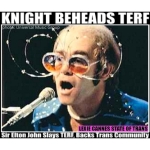 LEXIE CANNES STATE OF TRANS — The guy has made music for almost as long as I’ve been alive, likewise Sir Elton John has been a highly visible LGBT supporter during the same time, especially his involvement in combating AIDS.

I really couldn’t tell though, if he was a solid trans ally, however, he’s erased that doubt most recently by bringing public attention to the plight of transgender prisoners and other trans matters of note. Even with this being the case, I did not expect him to make a very public smack at a noted feminist turned TERF.

He told BBC Newsnight that Germaine Greer’s recent attack on trans people were the actions of an attention seeker living in another century.

Elton John also told the BBC: “We have to have sympathy for [transgender people] and we have to stop the treatment, the barbaric treatment for people like that, especially in prisons. The move towards acceptance of transgender people was accelerating, it’s hurtling along at a good pace. People are accepting transgender people in the mainstream and in the LGBT community.”

I normally ignore TERFs, but when a Knight beheads one, it’s worthy of my time.

As for the TERFs, the uttering of: “Just because you lop off your d**k and then wear a dress doesn’t make you a f***ing woman” is an emotional argument fallacy that puts one in the same class with religious extremists — this is about as far away from the scientific realm one can get. Strange bedfellows. 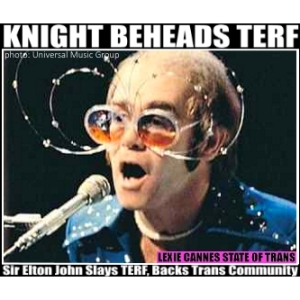