LEXIE CANNES STATE OF TRANS — We’ve seen this image before — a caricature of trans woman, bald with a mustache, standing over a toilet urinating in a women’s bathroom with a terrified mom holding an equally terrified daughter. These tactics are used by the lowest of the low. But this time, it found on the Facebook page of Dr. Michael L. Brown – a noted writer and lecturer on religious matters. Brown has a PhD from New York University and is an adjunct professor at a number of religious institutes.

Most importantly though, he’s a transphobe. A hatemonger spreading misery, triggering depression and suicides among us in his wake. The lowest of the low.

A quick look into Brown’s background reveals he makes a living with this muckraking. He supposedly has 20 books out, with the latest titled “Outlasting the Gay Revolution” — plastered all over his Facebook page titled “Ask Dr. Brown”. He also hosts a religious TV program that supposedly reach millions as well as a daily radio program. After posting the hatemongering image, it has since generated 4k+ shares, 4k+ likes and over 250 comments as of this writing — mostly a vile trans-hate frenzy — generating bucks for those who dabble in professional hate mongering. Yes, Dr. Brown is making cold hard cash off trans misery, depression and suicide.

Dr. Brown, congrats on this dubious honor. You are truly one ugly human being. 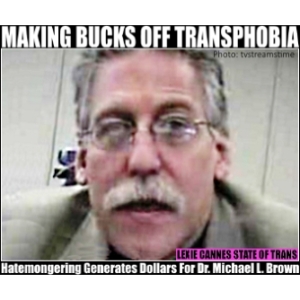 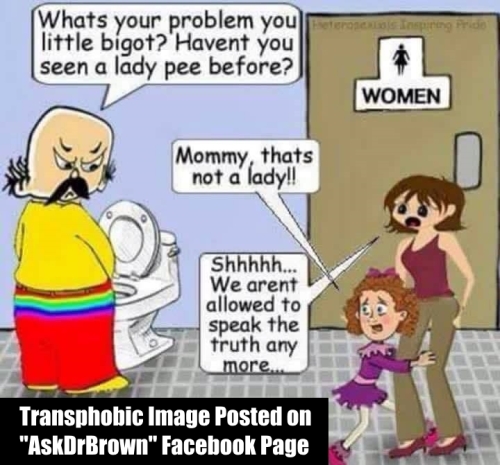 Like Loading...
‹ Noted artist says Caitlyn Jenner obviously has a “sickness”
Employer to new transgender employee on her first day: What are you? What’s in your pants? ›