LEXIE CANNES STATE OF TRANS — Immigration Judge Lorraine J. Muñoz’s track record with fairness in trans and LGBT cases is poor, fortunately however, in the immigration case of trans woman Edin Avendano-Hernandez, saner minds prevailed and Judge Muñoz’s order that the woman be kicked out of the country was overturned by a higher court. Avendano-Hernandez was seeking refuge to escape persecution in Mexico. In their decision to overturn, the 9th Circuit Court hammered away at Munoz for failing to understand basic concepts of gender identity. The appeals court also sent back two other transgender cases to the lower court for review.

Judge Jacqueline H. Nguyen: “The [immigration judge] failed to recognize the difference between gender identity and sexual orientation, refusing to allow the use of female pronouns because she considered Avendano-Hernandez to be ‘still male,’ even though Avendano-Hernandez dresses as a woman, takes female hormones, and has identified as woman for over a decade.”

According to a report in Fusion, in a different case also involving trans woman, Judge Munoz argued that using a trans person’s preferred pronoun in court was akin to Paul Reubens asking to be called Pee-Wee Herman. The same report said that Munoz has one of the highest denial rate in the country.

National Day Laborer Organizing Network’s Olga Tomchin: “Immigration judge Muñoz has been infamous in the LGBTQ immigration legal community for her explicit hostility against trans women asylum seekers, most of whom had fled to the U.S. after surviving horrific violence only to experience shocking cruelty by her.” 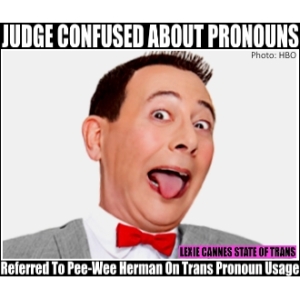 Like Loading...
‹ For the second time, UK media identifies a U.S. trans murder victim — Illinois, back in March of 2015
Noted artist says Caitlyn Jenner obviously has a “sickness” ›