Home › Everything else › Transgender massacre continues — next stop: Kansas City 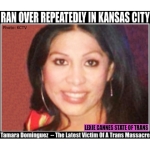 It’s boiler plate text these days. Just enter the city — Kansas City, Missouri — and the victim’s name — Tamara Dominguez  — and you’ll have another news report about the massacre of trans women in our society.

Local police are saying that on August 15, 2015, Dominguez was hit by an SUV and as she was laying on the pavement, the vehicle ran over her at least two more times.  Police arriving at the scene found her unresponsive.

Two days ago I wrote about 3 trans deaths: https://lexiecannes.com/2015/08/16/transgender-deaths-in-north-carolina-and-phoenix-second-death-surfaces-in-detroit/ 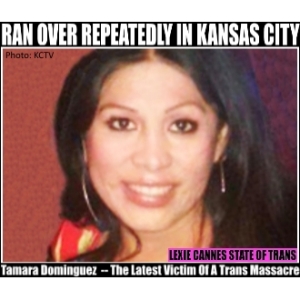