Severely decomposed body is identified as a Dallas transgender WOC 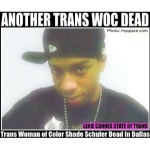 LEXIE CANNES STATE OF TRANS — Dallas, Texas police identified the severely decomposed body discovered in a field near Dallas’ Medical District on July 29th, 2015 as of Shade Schuler, a transgender woman of color.

Due to the state of discomposure, it took 2 weeks for the medical examiner to identify the body, the victim’s race and point to a cause of death — at least one report states the victim was shot to death, motive still unknown. At this writing an exact date of death is not available and apparently, no suspects.

According to Lone Star Q, Trans Pride Initiative’s Nell Gaither, assisted with the identification of the victim’s trans status.

No kind of spinning is going to rid us of the elephant in the room — TWOC lives are being snuffed out at a disproportionate rate. Cause: Hatred AND racism. If it was just hatred, white people would be leading the death tally here in the United States. If there ever was a compelling case that racism still exists in the U.S., this is it. 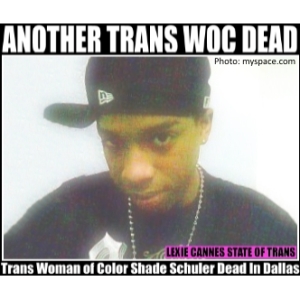