Home › Everything else › Studies: Puberty blockers results in happy young adults; “Hormone imbalance” not a factor in trans identity 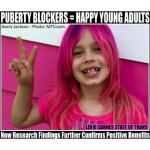 LEXIE CANNES STATE OF TRANS — Research findings from a Dutch study on trans youth indicates puberty blockers (aka hormone therapy) indicates a significant increased “opportunity to develop into well-functioning young adults.” The study finds the quality of life for them post-treatment were the same as their cis counterparts, with no participants in the study expressing regret and overall satisfied with their decisions. Likewise the happiness factor matched cis peers.

“Since puberty suppression is a fully reversible medical intervention, it provides adolescents and their families with time to explore their gender dysphoric feelings, and [to] make a more definite decision regarding the first steps of actual gender reassignment treatment at a later age. By delaying the onset of puberty, those children who go on to gender reassignment “have the lifelong advantage of a body that matches their gender identities without the irreversible body changes of a low voice or beard growth or breasts, for example.”

Researchers at Los Angeles’ Children’s Hospital Center for Transyouth Health have closed the door on the link between trans identity and hormone imbalance — there isn’t one. The center’s Medical Director, Dr. Johanna Olson as published in The Advocate: “We’ve now put to rest the residual belief that transgender experience is a result of a hormone imbalance.”

Other findings in the study of which there were over 100 participants — a bit more than 50% of the people in the study considered suicide with 30% making an attempt. This is not far off base from earlier research studies on trans suicide (see link below “suicide stats”). 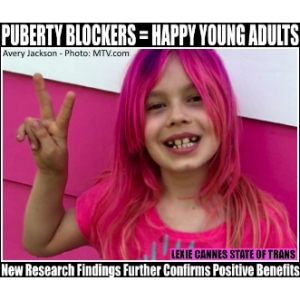