Mocking, condemning and sucker punching of trans people — what a nutty week! 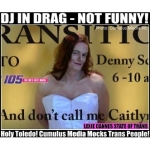 LEXIE CANNES STATE OF TRANS — In Toledo, Ohio, mega-broadcaster Cumulus Media, Inc., mocked trans woman Caitlyn Jenner by dressing up one of their DJs in drag and posing as her in the now-iconic Vanity Fair image, and plastering it on local billboards to drum up ratings for one of their local stations, Star 105.

This was first brought to my attention by blogger Char Davenport. An online campaign is underway to bring the billboards down. At least one advertiser has pulled ads since the campaign began according to Equality Toledo. Cumulus is the second largest owner of radio stations in the United States.

In Omaha, Nebraska, a deejay at a nightclub was arrested after bullying his way into a ladies room and sucker punching trans woman Kara Jeslyn Barone. The man, Stephen E. Thompson followed the punch with a transphobic tirade while he was being held back by others. He was charged with a felony hate crime — if convicted Thompson faces up to 5 years in prison. Barone suffered facial injuries.

In Melbourne, Australia, a doctor says transgender people are disordered, delusional and pathological. Dr Jereth Kok uses the argument from authority fallacy, with a dose of Jesus and Caitlyn Jenner to hammer trans people into oblivion.

Kok: ”I am a doctor; I have been educated about the human body, I prescribe powerful drugs (including hormones) on a daily basis and I see the results of all kinds of surgery. ‘Sex reassignment therapy’ is a sophisticated and cruel myth.”

“I am a doctor” is a clear red flag for rational thinkers to dodge this turkey. Even doctors have to support their assertions. One begins a persuasive discussion by pointing to the evidence, NOT towards themselves!