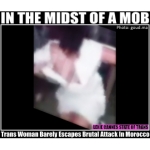 LEXIE CANNES STATE OF TRANS — A trans woman subject of a violent mob attack in Morocco barely escaped being added to the TDOR-2015 list when she found refuge at the last moment with a police officer who appeared to be in the area by happenstance.

A video of the attack showed the woman being violently beaten by approximately a dozen attackers with perhaps a couple dozen other people looking on.

Even more sordid testimony of our supposed civilized society manifested itself with the large number of people who choose to record video, than step in and perhaps save a life. There were several instances where the trans woman’s life could have ended right there and then — a hard foot stomp on the head while one’s head is on the pavement is never a good thing.

While Morocco is an area of heightened risk for trans people, mob behavior can happen everywhere, including in the United States.

The video is a sobering reminder to take steps to be safe. There are plenty of names observed on TDOR who were victims of mob violence.