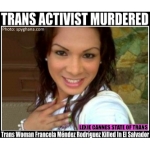 LEXIE CANNES STATE OF TRANS — A number of publications have confirmed the murder of trans woman Francela Méndez Rodríguez in Sonsonate, El Salvador on May 31st. She was murdered while visiting a friend, Consuela Flores Martínez. Through the examination of news reports, I believe her friend, Flores, was not transgender.

Although a newspaper in El Salvador described the murder as a hate crime, I was unable to find further details of the crime, nor whether there were suspects.

Rodríguez belonged to Colectivo Alejandría, a trans advocacy organization, Salvadoran Human Rights Defenders Network and at least several other human rights groups. Calls from outside the country insist that her death be throughly investigated.

Human rights groups and agencies in El Salvador gave conflicting numbers regarding recent trans and/or LGBT murders in the country, however data from Transgender Europe confirms that transgender murders in South and Central America are extraordinary high.

I spotted these comments in a blog written by trans advocate Carlos Cruz in El Salvador ( UPDATE: The quote was double checked by someone knowing the language and this more accurate):

“. . . If you check my posts you will see in my country as hate crimes end with the lives of LGBTI people, the most vulnerable population is transgender women. . . .

. . .  in El Salvador there is no access to justice for LGBTI people. The deaths of many transgender women remain unpunished, living in oblivion for the state. The recent murder of Francela Mendez sent shockwaves throughout the LGBTI community. Those who knew her can attest to his human qualities, his commitment to human rights activism and his tireless fight for better conditions for the LGBTI community.”

Cruz also gives an in-depth accounting of Francela Mendez’s accomplishments and advocacy work on behalf of marginalized people in El Salvador in the blog. I see did a photo apparently taken during Méndez’s funeral that showed her coffin partly draped with the transgender flag.