LEXIE CANNES STATE OF TRANS — Two opposite sides within the transgender community going at each other with flamethrowers on social media with a differing point of view — how is one to choose a side? The most “authoritative?” The one with most friends? The one “winning” the current flame war? No, nope and no way.

Here are two simple rules to remember (aka Lexie’s Rules of Engagement):

1) Any idea, claim, or proposal that requires checking inside one’s pants (or up one’s skirt, for that matter) is inherently flawed. We certainly don’t want cis people (ie: “bathroom cops”) doing this to us — nor should we be doing it among ourselves (ie: “post-SRS are the only true trans people”).

2) There is no such thing as a true authority (argument from authority fallacy). A layman with evidence is more factually correct than an authority without evidence (even if they are post-SRS with a PhD). There is virtually no point in quibbling over who is (or what makes one) an authority.  What only matters if they have evidence that supports their claims.

Whether it’s a statement by a widely recognized and respected leader of our community or someone who has stated a seemingly bizarro opinion, all we need to ask of either is for evidence that supports their claims. Once provided, we can make up our own minds based only on the evidence given (or lack of). We need not further respond to either party.

Engaging in an ad hominem (attack the person) flame war is destructive to the side with strongest evidence — a neutral observer isn’t going to care who is right or wrong here — hence the losing side “wins”. Instead, take the evidence (or lack of) to people that are in a position to actually make a difference (media, legislators, community leaders, lawyers, et. al.).

We’re never going to rid the trans community of family squabbles, after all, we’re a reflection of society as a whole, but the wise among us recognize that time spent in a squabble is better spent elsewhere making actual progress.

More on this topic: https://lexiecannes.com/ad-hominem-attacking-the-person-comments-and-hatetransphobic-remarks/ 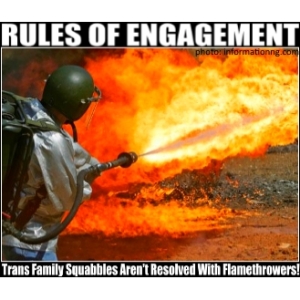