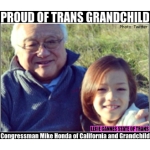 LEXIE CANNES STATE OF TRANS — Support poured in after U.S. Rep. Mike Honda of California announced that he is the “proud grandpa of a transgender grandchild” on Twitter according to a news report in the San Jose Mercury News. Honda also stated he hopes she “can feel safe at school without fear of being bullied.”

The tweet included a photo of Honda tightly holding his grandchild. The child’s name and age was not disclosed.

The Mercury News also reported that Honda said this in response to trans advocacy: “We need to ensure that our LGBTQ youth are never bullied because of their real or perceived sexual orientation or gender identity. These children need our protection and our love.”

Honda, a Democrat, founded the Congressional Anti-Bullying Caucus and is a member of the LGBT Equality Caucus.

How’s this for positive news? 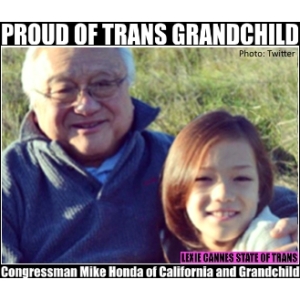 Like Loading...
‹ Trans woman murdered in Ohio, another tortured on video then killed in Brazil
(UPDATED) Deputized Texas ‘bathroom cops’ risk felony if they allow trans to use bathroom ›