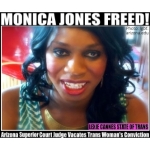 McClennen sent the case back to lower court. A retrial is possible.

Jones told Buzzfeed News: “This law needs to be thrown out because it unfairly targets women, transgender women, and people of color living in poverty. . . .  police wouldn’t do that to a man standing on the corner talking to a passerby.”

As research statistics show, trans women of color find themselves at a significant disadvantage in our society. It is unfair to set legal traps to trip them up when it was society that put them at a disadvantage in the first place.