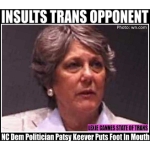 Allison, active in NC politics, is known to many in the trans community for being chosen as a delegate to the 2012 Democratic National Convention.

According to QNotes, Allison was telling the audience the many ways she attempted to run as a state delegate for the DNC in 2012 when she was interrupted by Keever.

Keever (heard in the background and captured on audiotape): “A man.”

Allison (amid background laughter): “Huh? A what?! There ain’t no man left in here, honey.”

Allison was upset by the comments and later told QNotes: “I would compare it to someone using a bigoted slur against me. I am a proud transgender woman and for me to be violated in this way at a public forum by a leader of the party was completely out of line.”

Keever has apologized to Allison, however, Keever has disputed some of what actually transpired. Allison says that Keever owes the trans community an apology as well.

While I’m sure it has happened before, this is the first time I know of a Democrat politician who has publicly insulted a trans person. IMO this major political blunder for a Democrat, especially one that supposedly has many LGBT supporters.

I wrote earlier about Janice Covington Allison and the DNC 2012: https://lexiecannes.com/2012/06/18/trans-man-proposes-to-partner-at-white-house-reception-nc-dems-choose-trans-woman-delegate-for-dnc/ 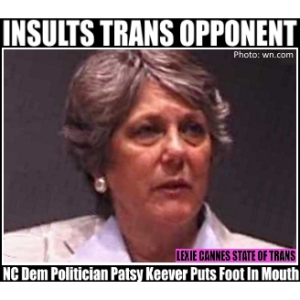