Suspect in 1989 California transgender murder tripped up by DNA

Stabbed to death in 1989, trans woman Carla Salazar was a casualty typical of many trans murders until most recently — unsolved and no suspects.

Arrested for Salazar’s murder earlier this month was Douglas Gutridge, an acquaintance of Salazar. He faces 25 years to life and is still in jail pending a $1 million bond.

Oddly, in 2009, Gutridge willing gave the police a DNA sample when lab findings revealed the presence of a male at the scene on the day of the killing. The lab’s findings however, wasn’t compelling enough for charges, then.

According to The Advocate, the victim’s family and friends had given up hope the case would ever get solved so this was quite a surprise. It also gives hope to the many other trans cold cases — at lease those with DNA collected from the scene.

This is pretty much compelling evidence how much DNA assessing technology has improved in 5 years.

While this is stating the obvious, the proper collection of DNA evidence at the scene and enter it into the database for future matching is the minimum any police agency ought to be doing for any violent crime. If the lack of witnesses, suspects or political will gets in the way of solving a trans murder, at least the door remains open for the murderer to link himself to the crime on his own when busted for something else. 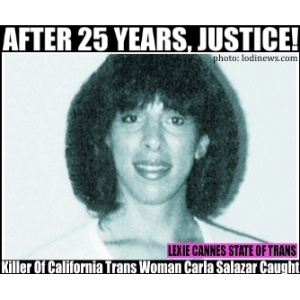