LEXIE CANNES STATE OF TRANS — Christine Bland, an engineer at Lockheed Martin who has worked on at least 3 major NASA space projects, was recognized by the National Organization of Gay and Lesbian Scientists and Technical Professionals as the 2014 LGBT engineer of the year.

Bland transitioned 3 years ago. Although she had early concerns, she found her employer accommodating and she, in fact, prospered there since that time. Lockheed Martin ranks at the top of the Human Rights Campaign’s Corporate Equality Index.

Bland, on equality in the workplace, in the Denver Post: “I’m just amazed at how much progress has been made. You can be your true authentic self and go after the things you want to do. Just be honest with yourself and everybody else, and let other people worry about their issues.”

Congrats to Christine! She worked on NASA’s Mars Reconnaissance Orbiter  and the new NASA Orion spacecraft — that’s one job I wouldn’t mind having. 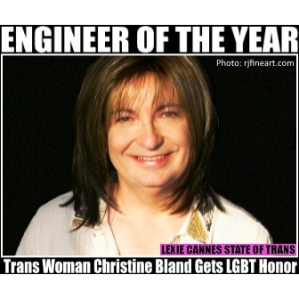