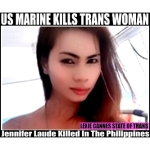 LEXIE CANNES STATE OF TRANS — Update 4 – Dec. 2, 2015 — The murderer of Jennifer Laude convicted. Reuters: “A US Marine was found guilty of killing a transgender woman in the Philippines on Tuesday and sentenced to six to 12 years in prison, closing a case that has reignited debate about the American military’s presence in its former colony.

The Olongapo City regional trial court also ordered Lance Corporal Joseph Scott Pemberton to pay more than 4.5 million pesos ($95,350) to the family of Jennifer Laude, who was found dead last year in a hotel outside a former US navy base northwest of Manila. Pemberton had been charged with murder, but was convicted of the lesser offense of homicide, which does not require malicious intent.”

UPDATE-3 – October 27, 2014 — Marc Sueselbeck, the German fiance of trans murder victim Jennifer Laude was hospitalized after he was due an deportation hearing following an illegal attempt to enter a military base. From Pink News UK:

“Mr Sueselbeck, who travelled to the Philippines after the murder to campaign for justice on behalf of his girlfriend, was to face a deportation hearing after he jumped a fence at the military base in order to try and confront Mr Pemberton.

However, he was rushed to hospital this evening, soon after being prevented leaving the country aboard a flight at Ninoy Aquino International Airport because of the ongoing proceedings. . . .

The country’s Justice Secretary Leila de Lima told the Inquirer that he will proceed with plans to deport Sueselbeck and ban him from the Philippines, having filed “charges of undesirability”.

The incident rippled up the military chain of command on Oct. 12, with top officers warning of trouble with one of the nation’s closest allies in the region. . . .

“The Philippines is really driven by public opinion,” said retired Air Force Col. Carl Baker, who studies the Philippines closely as the director of programs at Pacific Forum Center for Strategic and International Studies. “These type of incidents really have a big impact on how they view their relationship with the United States.”

Laude was found dead in Olongapo City, near Subic Bay. Her body apparently showed signs of strangulation, and an autopsy report stated that the death was due to asphyxia by drowning, according to Reuters. . . .

“Jennifer is not just a victim here,” Cordova [Kate Montecarlo Cordova, the founder and chairwoman of the Association of Transgender People in the Philippine] said in an email. “She is a hero on the field of trans advocacy. Her death beckoned other trans individuals to come out and express support to trans advocacy. It’s just sad that one’s life has to [be lost] for us to be given attention.”

“Philippine authorities on Tuesday identified the US serviceman tagged in the killing of a transgender woman in Olongapo City over the weekend.

(Original article) According to several reports, the United States Navy has a U.S. Marine in custody for his involvement in the murder of a Philippines trans woman known as Jennifer Laude. The murder occurred in Olongapo city in the Philippines.

An investigation has begun by the US Naval Criminal Investigative Service and three witnesses have also been detained by the Navy. The name of the suspect is Private First Class Joseph Scott Pemberton. The suspect is believed to be from the USS Peleliu, currently docked in Olongapo.

The cause of Jennifer’s death was not disclosed, but her lifeless body was found in a bathroom with her head in the toilet bowl.

There is ongoing discussion between the Philippines government, the U.S. State Department and the navy over jurisdiction of the trial but it appears the parties are awaiting the outcome of the investigation before making a decision.

Tip of the hat to Iwa Nasayakka

There’s no doubt this trans woman’s death will not fade off the radar. Hope some good comes out of this. 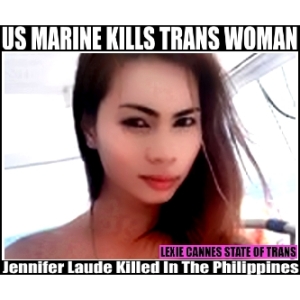