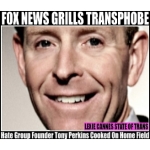 LEXIE CANNES STATE OF TRANS — I had to double-check, was this satire? Nope. FOX News was boiling one of its own in a cauldron.

Tony Perkins of the Family Research Council has a history of using transphobic statements like “Can you imagine walking into your child’s classroom and meeting a teacher dressed in drag?” to undercut proposed trans/LGBT equality legislation and administrative rules. He found a friendly venue in FOX News to vent hate and fear mongering. Not any more.

Perkins appeared on Fox News Sunday to talk about the recent Supreme Court decision that let gay marriage proceed in 5 states. After bickering with an attorney in favor of marriage equality, Perkins reverted to his “marriage equality is a slippery slope” talking point. At that point FOX’s Chris Wallace took charge (sourced from Raw Story):

Wallace: “What are you suggesting? That there’s going to be polygamy, that people are going to be marrying their pets?”

“Alright, you and your wife live happily in this house,” Wallace said. “There’s a same-sex couple living here. What’s the damage to you?”

“Let’s talk about the wedding vendors that have been put out of business,” Perkins said.

“I’m not talking about that,” Wallace interrupted. “That’s a different issue. I’m asking you, what’s the impact on you and your family to have these people living next to you.”

Perkins insisted that his children would be “taught values and morals against what I teach as a parent at home.”

There’s more, but you get the gist.

They cooked up something special at FOX News yesterday — but is it permanently on the menu? We’ll see.

The Southern Poverty Law Center has listed Perkins and his organization as a hate group: http://www.splcenter.org/get-informed/intelligence-files/groups/family-research-council 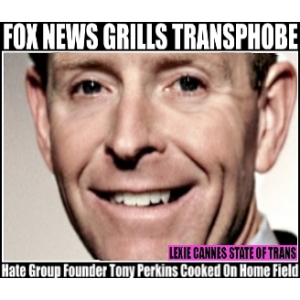