The Los Angeles Police Department said Monday that detectives with the Rampart Division have arrested one person and were still seeking two additional suspects in the Oct. 2 killing of 47-year-old Aniya Knee Parker. . . . Detectives have not released the identity of the arrestee and said their investigation is ongoing.

Original article — Oct. 5, 2014: Surveillance video captured the last moments of trans woman Aniya Parker’s (aka Asia Parker) life after she was shot on a Los Angeles area street on October 2nd. Video shows Parker running away from a group of suspects only to be shot in the head. She managed to cross the street but collapses on the other side. She later died at a hospital.

Police say it may have been an attempted robbery, but others reported that her purse was not taken. Police are asking for help from witnesses: Los Angeles Police Department at (877) LAPD-24-7

A vigil organized by trans activist Kerri Cecil has been held.

In Medellin, Colombia, a trans person was stoned to death by attackers according to Hernando Muñoz, a member of a Colombian trans/LGBT group.  Munoz says there are witnesses ready to testify and he believes the crime was motivated by the victim’s trans status.

There was no information on what led up to the stoning or if suspects were arrested.

The victim’s name in the news report is Gabriel Mario Duque, There is a remote chance that the victim was a trans man, but the reporting doesn’t fit that case. UPDATE: The victim preferred to be called Marcela according to a radio news report.

Anyone further information please share in the comments section. 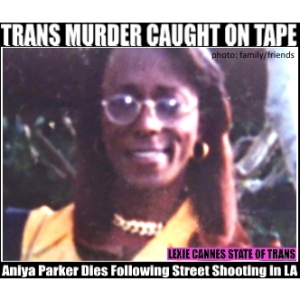