Barney Frank, silence would have been golden! 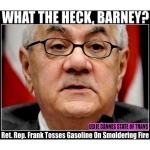 LEXIE CANNES STATE OF TRANS — Barney Frank, I can’t figure out why you, now a retired Congressman, didn’t just quit while you’re ahead and rest on your laurels? Bringing to life a long-beaten horse that many people are still having difficulty moving on from isn’t exactly the behavior of a wise elder statesman.

Don’t worry, I’m not going to rehash 2007 all over again, except to respond to something new Barney Frank brought to the table — the issue that ‘we didn’t help lobby’ for the LGBT rights legislation. Now, I don’t know for sure if his claim is true, but trans people DO have reason for not turning out en mass, and it’s this –> https://lexiecannes.com/stats-on-transgender-discrimination-violence-and-suicide/

There are many of us that understand the nuances that come with getting LGBT civil rights legislation passed at the federal level and we can grasp the enormous difficulty legislators face. For others though, the decision to exclude trans people in order to get something passed in 2007 rather than holding out a bit longer was a bit too much.

As a result, there was a lot of anger, hurt and distrust within our community and it has lingered for years. The Human Rights Campaign’s (HRC) recent apology was a huge step to heal and unite everyone and to move forward. Or so we thought. Unfortunately, in a recent interview, Barney Frank blew up the healing by stating the HRC should not have apologized!

What the heck, Barney? Did we really need to inflame this thing at this point in time? 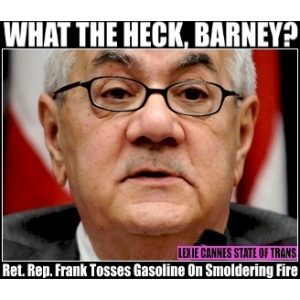