Trans woman dies after being pushed off moving train 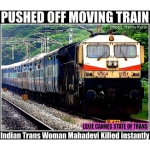 LEXIE CANNES STATE OF TRANS — A disabled Indian trans woman was pushed off a moving train earlier this week by two youths in Bangalore, India according to witnesses. Mahadevi was killed instantly after landing on parallel tracks according to reports. Police say they have yet to determine if she was pushed or fell and called for an autopsy.

Witnesses say that the woman was involved in a dispute with other passengers on the train when the two youths got involved and began fighting with the woman just prior to pushing her off the train. The youths escaped before police arrived after initially being held by the passengers.

The woman was apparently known to regular travelers, and one such person informed the trans community who then showed up at the crime scene.

No other information is available at this writing.

While reports do not clearly indicate if the woman’s trans status had anything to do with the crime, however, transgender deaths stats points towards it being likely and I’m giving the victim the benefit of the doubt unless new information proves otherwise. 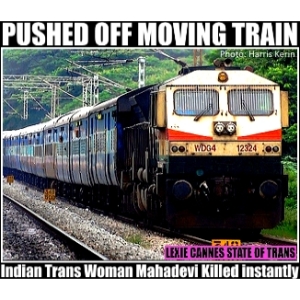