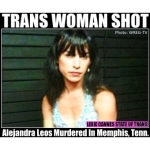 LEXIE CANNES STATE OF TRANS — A suspect was arrested two days after a trans woman was shot to death near her home in Memphis, Tenn. on September 6, 2014. Police arrested Marshall Pegues and charged him with the murder of Alejandra Leos.

TV station WREG stated that a police report indicated that Leos was shot in the back and there was a quarrel between the two prior to the shooting.

Alejandra was supposedly well-known in the Memphis trans community.

TDOR is two months away and once again there will be a full slate of victims.

Tip of the hat to Mika Ellen Orzech. 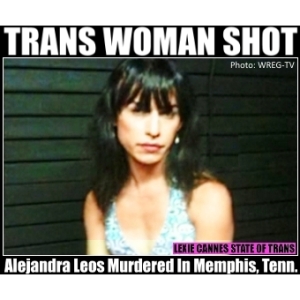 Like Loading...
‹ UPDATE — Trans-unfriendly DMV finds themselves at the receiving end of a federal lawsuit
Fired ‘trans are nutjobs’ radio hosts return to the air ›