Transphobic writer Gavin McInnes gets boot from company he created

LEXIE CANNES STATE OF TRANS — You know you’re in hot water when your subordinates push you out the door of the very company you created — and it couldn’t have happened to a better person.

Last week, Thought Catalog published a piece written by writer and FOX News contributor Gavin McInnes titled “Transphobia is Perfectly Natural.” In no time at all the piece was universally noted as one of the most transphobic articles of all time. No small feat in a world where there is no shortage of transphobic people.

The article is still up at Thought Catalog, albeit with a “proceed with caution” warning. On their site, I looked up criteria they expected from their contributors and came across this gem:

With that in mind, here’s a quote from McInnes’ article [Trigger Warning]:

We’re all transphobic. We aren’t blind. We see there are no old trannies. They die of drug overdoses and suicide way before they’re 40 and nobody notices because nobody knows them. They are mentally ill gays who need help, and that help doesn’t include being maimed by physicians. These aren’t women trapped in a man’s body. They are nuts trapped in a crazy person’s body.

So, back to Thought Catalog’s ideals: fun, smart, and creative, i.e., entertaining, journalistic, and literary? I don’t think so. They should pull the piece.

McInnes’ company, Rooster, an ad agency, is distancing themselves from him as fallout is beginning to impact their clients. McInnes, however, is still taking potshots at trans people via social media. 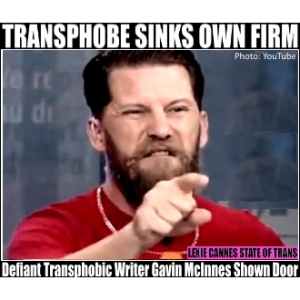