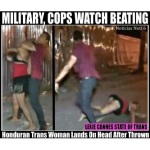 LEXIE CANNES STATE OF TRANS — Television news video shows a trans woman being kicked, beaten and thrown landing on her head in San Pedro Sula, Honduras. The exact date is unclear but it does appear to be a recent event. No name was released for the victim or her condition.

At least one police officer was captured on the video kicking the woman. Video shows the presence of military personnel and news reports stated that they were military police. The majority of the attack was conducted by an unidentified man wearing civilian clothes. At the end of the attack, the man threw the woman in the air and she landed squarely on her head.

The Honduran military says the video was manipulated and they didn’t mistreat the woman. LGBT advocate Mario Schauer says the beating was ‘homophobia at its best’ and there has been 34 LGBT murders in Honduras this year.

This incident is particularly troublesome when considering the recent arguments made by some transgender people that we promptly ship all the Honduran refugees back to Honduras without due process. IMO, a trans person making the argument to send trans/LGBT kids back to such a brutal regime is just as troubling as this beating. 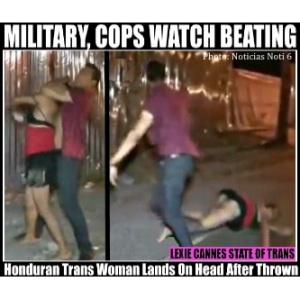