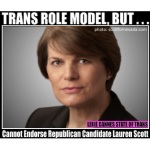 LEXIE CANNES STATE OF TRANS — While Lauren Scott is a great trans role model — her founding of Equality Nevada, and her success in gaining rights for trans/LGBT Nevadans is testimony to this — she has unfortunately chosen to align herself with the political party that would legislate trans people out of existence.

That’s right, Scott is running as a Republican for the Nevada state assembly. Her opponent is incumbent Democrat Michael Sprinkle. While one can make the case Scott would be able to help ensure our rights are not usurped, the fact of the matter is so will a Democrat incumbent.

Democrats apparently hold a majority in both houses in Nevada preventing Republicans from attempting to bring nutty legislation to the floor that would either allow legal discrimination against trans people, or rid us of all rights, period — things we’ve seen in other states with Republican majorities. In Nevada, these things cannot even make it to the floor of the legislature. Should the majority change, there is very little Scott can do to prevent this.

Scott argues things are changing within the Republican party. But a quick sampling of headlines in the media or articles I’ve previously written in this space, points towards things within the Republicans Party remaining the same at best, or several decades backwards at worse.

Lauren Scott, until you can show that Republicans aren’t laughing at you (us) behind your back and you’ve rid the party of “bathroom cops,” we’ve no choice but to vote for Democrats because they are the only political party with power to stop us from being subject of public ridicule or living life in a closet.

You are, however, a trans role model for what you’ve achieved for trans people in the state of Nevada.

I do understand many trans people have Republican values, unfortunately in this day and age, with the majority of Republicans wishing to trample trans rights, I see no reason to accommodate those values.