LEXIE CANNES STATE OF TRANS — Transgender Americans gained very little rights under the George W. Bush administration, and were at high risk of losing them if either John McCain or Mitt Romney took office. Under the Presidency of Barack Obama, particularly in the last few years, trans people have made strides unlike anytime in history.

The sharp division in the U.S. Congress, meant that any transgender gains at the federal level would have to come from updates in federal administrative policies and executive orders directly from the White House. Obama has not hesitated to use either when it comes to trans equality. Indeed, the past few years have been historic in the number of rights afforded us directly from the executive branch.

National Center for Transgender Equality’s Mara Keisling:  “[Obama] has been the best president for transgender rights, and nobody else is in second place.”

If a Republican wins the White House in 2016, many, if not most, of these trans rights gains will be rescinded immediately. 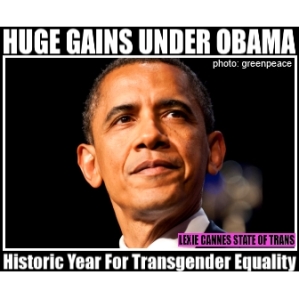 Like Loading...
‹ “Lexie Cannes” (the movie) now available for instant viewing!
(Update – suspects arrested in both cases) Trans woman burned to death in Florida, another shot to death in Ohio ›