LEXIE CANNES STATE OF TRANS — Investigation into the mysterious death of trans activist Zoraida Reyes of Santa Ana, California continues as Anaheim police believe her body was moved following an unexplained death. Reyes body was found in a parking lot earlier this week. Reyes had no visible wounds and autopsy findings were “inconclusive” according to CBSLA.com. She was active in the trans community and a vigil was held on Friday in her honor.

UPDATE: Nov. 2, 2014 — An arrest has been made in the killing. Randy Lee Parkerson has been charged with felony murder. More: http://www.ocregister.com/articles/reyes-637877-dunn-anaheim.html

A week ago in Baltimore, Maryland, trans woman Kandy Hall was found brutally murdered in a field. Recent news reports revealed no new details. The Baltimore police is asking for the public’s help in providing clues that would help the investigation. A reward is being offered for any details that lead to an arrest.

Earlier in April in Istanbul, Turkey, trans woman Çağla Joker was gunned down by two assailants. I did not initially report on this due to seemingly contradictory information resulting from Turkish language translations into English. However, A follow-up check revealed this incident did occur and two suspects have since been arrested. A minor was involved and the murder appears to be hate-related. 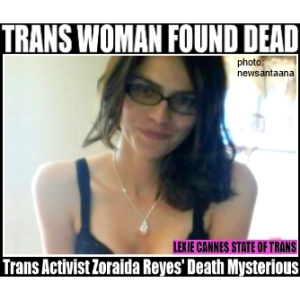