LEXIE CANNES STATE OF TRANS — We’re “confused” and “mistaken” psychiatrist Paul McHugh wrote in an op-ed piece about us for the Wall Street Journal and stated that any treatment for us other than those normally prescribed for a mental disorder can “lead to grim psychological outcomes.”

Clearly any psychiatrist using the word “transgendered” likely hasn’t read the stats on transgender suicide. Had he done so, he’d know outcomes for trans people are already pretty grim — partly driven by the archaic mental disorder label applied to us by people in his profession in the previous century.

Just by staying away from people like McHugh, trans people have a shot at a less grim outcome.

McHugh: “The transgendered suffer a disorder of “assumption” like those in other disorders familiar to psychiatrists. With the transgendered, the disordered assumption is that the individual differs from what seems given in nature–namely one’s maleness or femaleness. Other kinds of disordered assumptions are held by those who suffer from anorexia and bulimia nervosa, where the assumption that departs from physical reality is the belief by the dangerously thin that they are overweight.”

Okay, let me get this straight. This guy is saying trans people are in the same “mental disorder” class as people with anorexia and bulimia nervosa, right?

In doing a bit of research on his background, I came up with this gem from Transexual Roadmap:

A noted Catholic conservative, McHugh famously shut down the gender identity clinic at Johns Hopkins in 1979, . . . McHugh argues that gender variance is essentially a lifestyle choice or an ideology, and that offering trans health services is effectively collaborating in a patient’s delusion. He has described it as akin to giving liposuction to an anorexic person.

While I cannot vet for the factual accuracy of the TS Roadmap statement I quoted, however, I did spot of photo of McHugh appearing on FOX News. Draw your own conclusions. 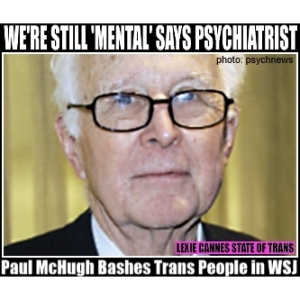