Above the “T”-storm, blue skies! 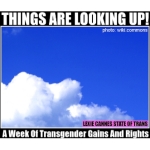 LEXIE CANNES STATE OF TRANS — Did one man’s ego turn your week into a “T”-storm? If so, you might have missed these other trans-related things that happened during the past week — all far more newsworthy and positively impacting trans people than any tweet from RuPaul:

1) The so-called Medicare ban for SRS has been removed. There are still hoops you’ll have to jump through, even then, it is not a sure thing — getting matched with the right (and willing) doctor appears to be the key to success here. We will be watching this closely.

2) Trans actress Laverne Cox is on the cover of Time magazine. It doesn’t get more mainstream than this. But more important than this helpful “normalization” of all things trans in our society, this positive exposure by Time gave the Christian right a severe blow to the gut.

3) Houston, Texas, passed a trans/LGBT human rights protection ordinance. That’s right. A large town in Texas. I know Houston isn’t anywhere near deep red as the state as a whole, but for us living in deep blue states, we’re mildly surprised, Texas!? The passage gives additional ammo to trans advocates in places like Boise, Idaho — they’ve been trying to get a trans equality law on the books for years. Now they can point to Houston and tell city councilors “well, if they’re OK with this in Texas, it ought to be okay here in Boise, Idaho!”

4) Efforts to repeal Maryland’s trans protection law fell flat. Opponents of the measure could not even get enough signatures to get over the first of many hurdles. This along with the failed California repeal effort ought to give others considering repeal efforts in the future reason to just get on with their lives.

Get your heart tugged by Lexie Cannes — an award-winning feature film about a transgender woman. Get it here right now: http://www.amazon.com/gp/product/0963781332