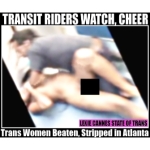 LEXIE CANNES STATE OF TRANS — Passengers on an Atlanta MARTA train cheered, took photos as two trans women were attacked and one stripped by a group of men who began harassing the duo prior to boarding the train on May 20th. No one on board the train called the police or transit authorities. However, cell phone video of the beating was posted online by a passenger.

Following an investigation, transit police late last week arrested Frederick L. Missick and Luther L. Thomas and charged them with disorderly conduct. They say the investigation is ongoing and more charges may be filed, however, very few people have come forward with information. People found at the scene were unresponsive transit authorities say.

The victims, Janell Crosby and Tyra Woods, say they were harassed because they were transgender and both repeatedly told the men to stop. While Crosby managed to hold off her attacker, Woods was stripped of her clothes.

There were a number of sites showing the video, but some were pulled or censored. The one I used to get this screen shot came from an exploitative site, so I am not providing a link to it.