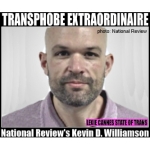 LEXIE CANNES STATE OF TRANS — A transphobe poster child is born. His name? Kevin D. Williamson — a writer for the National Review — a right-leaning journal that would please many a tea partier, that is, if they could only read.

Sure, there has been no shortage of transphobic people to date — misguided Christians who use the Bible to hate, ignorant politicians who use their power to oppress and numbskulls that use violence to harm — but Kevin D. Williamson is in a different class. By writing for the widely read “intellectual” mouthpiece for the Republican party found by William F. Buckley, Jr., Williamson’s transphobic prose makes its way to many of those with influence that can hinder trans equality.

In a bloody hit piece that is an apparent response to trans actress Laverne Cox’s appearance on the cover of Time, Williamson composes blood spatter on a national scale we haven’t seen since Dexter:

“Bradley Manning, whom we are expected now to call Chelsea . . . “

“Bradley Manning is not a woman. Neither is Laverne Cox. Cox, a fine actor, has become a spokesman — no doubt he would object to the term — for trans people . . .”

“Katie Couric famously asked him (Laverne Cox) about whether he had undergone surgical alteration, and he rejected the question as invasive . . .”

” . . .God help her (Couric) if she had misdeployed a pronoun, which is now considered practically a hate crime.”

Later on Williamson made this statement as the rationale against the existence of trans people:

“The most famous example of this is the voodoo doll. If an effigy can be made sufficiently like the reality it is intended to represent, then it becomes, for the mystical purposes at hand, a reality in its own right.”

Huh? I may be a bit confused here being covered in blood and all . . . but not to worry, Williamson slices it home for us with this:

“Regardless of the question of whether he has had his genitals amputated, Cox is not a woman, but an effigy of a woman.” 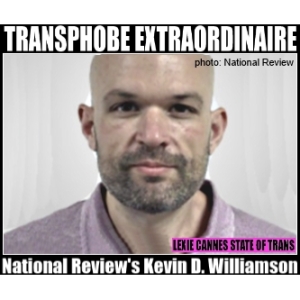