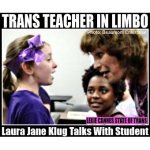 LEXIE CANNES STATE OF TRANS — Nearly 2 weeks ago a transgender teacher in Texas was suspended following a “distraction” complaint from a parent. The teacher, Laura Jane Klug, was told by Lumberton Independent School District Superintendent John Valastro to stay home until ‘until the school board decides whether allow her to return to work’.

Following a school board meeting, there were news reports that she was reinstated. A LGBT publication, The Lone Star Q, got a confirmation of the reinstatement from the district’s HR director Anna Miller.

However, in the time since, Klug, a substitute teacher, did not received any calls for work. A television station, KBMT-TV is reporting that Valastro hasn’t actually made any decision on Klug’s reinstatement. The district didn’t comment further.

There hasn’t been any news on the Klug matter for at least 5 days. At this point in time we do not know Klug’s actual status with the school district.

I had hoped this his unexplained contradiction by school officials would have been cleared up by now. So, like Laura Jane Klug, we, too, are in limbo.

t/h to all of you that brought to my attention Klug wasn’t getting calls for work from the district.

Like Loading...
‹ Defiant anti-transgender bar owner loses business after accounts seized
Wondering if the Salvation Army is trans-friendly yet? (They’re not) ›