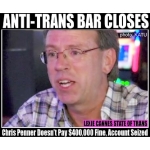 LEXIE CANNES STATE OF TRANS — The saga of Portland, Oregon bar owner Chris Penner ended Saturday after he closed his bar after the seizure of his business accounts by the Oregon Bureau of Labor and Industries (BOLI) to settle a $400,000 discrimination judgement against him.

Penner gained notoriety when he left a voice mail messages for his transgender customers of his bar, then called the P Club, telling them not to return because they were ‘hurting his business’.

BOLI began an investigation, but Penner however, remained defiant through the process — insisting he did not discriminate. Last summer however, BOLI found Penner guilty of violating the 2007 Oregon Equality Act and ordered the now renamed Twilight Room Annex to fork up $400,000.

Penner claims he was appealing the case and became surprised to find his bank account empty on Wednesday, but BOLI was having none of that:

BOLI’s Charlie Burr in The Oregonian: “We have an enforceable judgment against Penner and the Twilight Room from when he discriminated against his patrons by denying them service based on gender identity. To our knowledge, Chris Penner has not asked the court of appeals for a stay of enforcement to halt the payments that he owes. To date, we have not received any payment from Chris Penner. We are going to try to collect the money.”

I’ve written about this story from the beginning and Penner would have been better off if he admitted to his blunder right off the bat. Apologizing now that his bank account is empty is simply way too late. 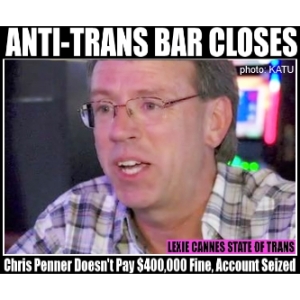