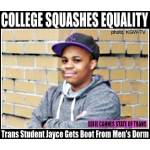 LEXIE CANNES STATE OF TRANS — George Fox University, a Christian college located in a town just south of Portland, Oregon told a currently enrolled trans student that he would not be able to live with other men on campus this fall.

The student, Jayce Montgomery, has since filed a formal discrimination complaint and says the university’s decision made him ‘feel rejected, misunderstood and punished for something I cannot change’ according to KGW-TV.  Jayce is the secretary for the on campus group Black Students Union and Alliance.

In response to a petition started by Jayce’s mother, the university had this to say:  “The university has researched the student’s attorney’s legal claims and believes they are without merit, especially given the religious nature of the university.”

The university also said they were “disappointed in how the situation has escalated.”

They’re disappointed?!! The university heavily markets itself as a premiere academic institution in the Portland, Oregon area. If they are going around squashing trans equality in this very liberal state, they should expect nothing less than a firestorm in response.

Feel free to drop a line as needed:

You, too, can have your heart tugged by Lexie Cannes — an award-winning feature film about a transgender woman who is stalked, solves a mystery, saves a lost soul and finds love. Get it here: http://www.amazon.com/gp/product/0963781332

Like Loading...
‹ Anti-trans rights foes go on a rampage in Maryland; California
Transgender model comes out citing need to help others ›