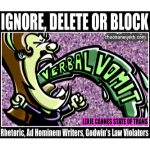 LEXIE CANNES STATE OF TRANS — Let me erase any doubt right off the bat — when it comes to all things transgender, it is important that everyone is heard. Whether its transgender colleagues or those trying to oppress us, an opportunity to be heard ought to be provided.

For the former, one never knows when colleagues holding different views could provide information that triggers one to reformulate an opinion, while for the latter, “knowing thy enemy” is usually a reliable source of ammunition for neutering them. Being heard though, comes with showing respect for the reader.

For the purpose of this article, I’m focusing on written discussion between our transgender colleagues and friends on social media and in the blogosphere.

Obviously, false claims and rhetoric can safely be ignored. If the writer did not take the time to ensure the statements being made are factual, readers are under no obligation to read further, comment or share the information.

Deleting the article and blocking the writer from sharing on your social media page or site is a perfectly acceptable course of action here. The internet will thank you for nipping misinformation in the bud.

Writers making ad hominem comments (attacking the person, not the argument), is also another cue to stop reading. This is true even if the point the writer is trying to make is valid. Writers don’t get to make their point by bullying. This is would be another great opportunity to delete the article and/or block the writer.

Discussion decorum for our community ought to be free of having to dodge loose cannons, wading through personal vilifying and witnessing the restructuring of the Third Reich.

As for the writers, they’ll soon shift their tactics if they want an audience. In the meantime, delete and block guilt-free.

An overflowing in box prompted this article. Thanks to everyone that contacted me! 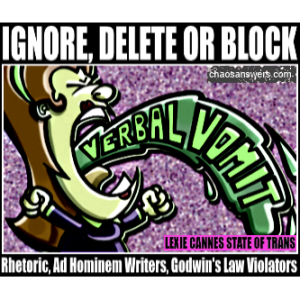 “Lexie Cannes” — an award-winning feature film about a transgender woman who is stalked, solves a mystery, saves a lost soul and finds love. Get it here: http://www.amazon.com/gp/product/0963781332

Like Loading...
‹ Mayors go to bat for transgender people in DC, Salem, Mass.
Moving on from Jared Leto; Why trans actors don’t usually get trans roles ›