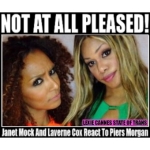 LEXIE CANNES STATE OF TRANS — UPDATE Feb. 24, 2014: CNN and Piers Morgan announced plans to end his show on the network. Apparently plans has been in the works for a while due to low ratings — no word on whether the sparring with Janet Mock in recent weeks sped up the decision. Morgan may remain with CNN, however. More: http://www.nytimes.com/2014/02/24/business/media/piers-morgan-and-cnn-plan-end-to-his-prime-time-show.html?_r=0

Original Article: By now, everyone and their cousin has voiced an opinion on the Mock vs. Morgan match. A bell has rung and now it’s the end of round two and it appears to be a draw.

Mock, of course, is the widely known writer and transgender activist and Morgan is a former British tabloid journalist, a sometimes talent show judge and a host of a CNN talk show. Mock appeared on Morgan’s show twice now (initially to promote her book) and she’s less than pleased with the outcomes.

To begin with, the deck is stacked at the CNN studio. The mike is controlled by Morgan and the power of editing (including graphics) resides with Morgan. Even during “live” shows, some bits are pre-recorded and this was actually the case in one of Mock’s appearances. The home court advantage for Morgan is significant.

In addition, most trans people wouldn’t put themselves on the air with a journalist schooled in exploitation. Janet Mock may be among the most qualified to take on Morgan, but even then, the best she could hope for is a draw.

Not unexpectedly, genitals were brought up and ‘man’ was thrown around a bit — especially on a graphic. Mock made points for the trans community, but Morgan pulled the battered host bit. In once panel discussion that followed, sans trans representation, it was a trans people a smack down, save for one panelist. The fight carried over to social media which drummed up a good deal of publicity for both sides.

I’m calling the whole thing thus far a wash. Mock may have sold a few books, but I’m not so sure as a whole, the trans community gained anything. I hope Mock is able to get better venues to promote her book, but I do understand the difficulty of getting them in the first place, hence the decision to take on Piers Morgan.

Here’s another view by Kara Tucker — one that prompted me to write-up my own:
Kara In The World: La, La, La Means I’m Not Listening To You.