LEXIE CANNES STATE OF TRANS — Long time transgender activist and physician Dana Beyer announced last week of her intention to run for a seat in the Maryland state Senate. I think, if elected, she’ll be a great state Senator for the citizens of her state.

But as a long-time political junkie and observer, I’m scratching my head over Beyer’s strategy. Admittedly, I’m not keyed into the ongoing of state level politics in Maryland, but the decision made here doesn’t seem to fit a well thought out plan to strengthen our influence in that state.

Don’t get me wrong — this is the United States of America, Beyer can run for almost any elected office she wants, in any way she chooses. And if she wins, more power to her, I say.

However, Beyer’s decision to run against a strong trans ally — one that sponsored an anti-transgender discrimination bill at that — has many in our community questioning the wisdom here.

Smart money — and politics is all about getting and spending money to get elected — would put her running for a seat in the House of Delegates for a third time, or moving to another Senate district, or simply abiding her time. The key for most successful political strategies is the right timing. I’m not seeing it here for this Senate seat.

I wish her luck, but if Beyer is to go this route, she pretty much has to win. I don’t see any kind of political recovery if she misses after aiming this high. 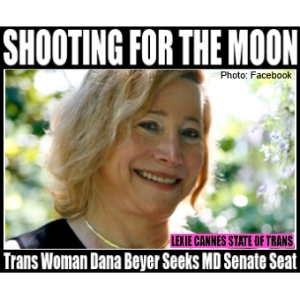