The following are some of the findings from the new American Foundation for Suicide Prevention — UCLA Law School’s Williams Institute study:

65 percent of respondents who experienced violence at work.

Over half of those who experienced harassment or bullying in schools.

57 percent of those who reported that their family chose not to speak/spend time with them.

69 percent of those who had ever experienced homelessness.

60 percent of those who reported a doctor or healthcare provider refused to treat them.

51 percent of those who are HIV-positive.

55-65 percent of those with disabilities.

57-61 percent of those disrespected or harassed by law enforcement officers.

The initial 2011 survey findings were published in Injustice at Every Turn. A Report of the National Transgender Discrimination Survey. The findings in that report marked a turning point in the lives of trans people — raw data, rather than speculation, could be used to argue for  legislative and administrative changes needed to reverse dire conditions for trans people. The new study significantly improves the outlook for trans people. 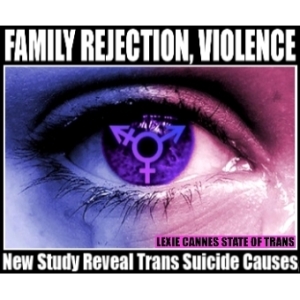