LEXIE CANNES STATE OF TRANS — Following a showdown with a trans woman who dared him to ‘stone her to death,’ a Shreveport, La., City Council member withdrew his attempt to repeal an anti-discrimination ordinance.

During a city council meeting in December, Councilman Ron Webb argued: “the Bible tells you homosexuals are an abomination . . .” but persuaded no one as the ordinance was passed 6 to 1.

In a little more than a week later, Webb proposed a measure to repeal the ordinance and during a recent city council meeting, trans woman Pamela Raintree called out Webb and stated:

“Leviticus 20:13 states, ‘If a man also lie with mankind as he lieth with a woman, they shall surely put him to death.’

I brought the first stone, Mr. Webb, in case that your Bible talk isn’t just a smoke screen for personal prejudices.”

Webb dropped his repeal proposal shortly after that. 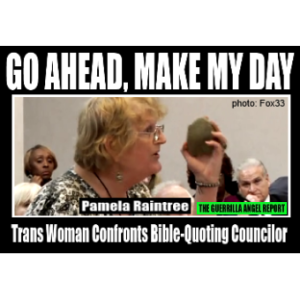 Here’s a transgender feature film that I’d be honored if you watched: “Lexie Cannes” http://www.amazon.com/gp/product/0963781332