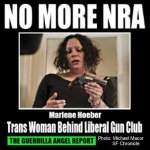 THE GUERRILLA ANGEL REPORT — With the National Rifle Association decidedly leaning to the far right with anti-transgender radicals like Grover Norquist on board, what is a gun-loving trans person to do?

Join the Liberal Gun Club says trans woman Marlene Hoeber. She says the club was created in response to the reactionary politics of the NRA. Hoeber: “I can’t put money into a group that gives campaign contributions to people who (say) how terribly wrong it is to walk down the street holding my girlfriend’s hand.“

Hoeber says the group is open to all liberals — some who have found themselves banished from gun clubs and ranges, others who are simply turned off by the ‘antics of gun culture.’ Says another member of the club: ‘we’re the NPR of gun clubs’.

The group meets on ranges every few weeks in Northern California but also gladly teach visitors gun basics and educate people on safety.

The group is trying to ramp membership and awareness. This is their website: http://www.theliberalgunclub.com/

Tip of the hat to the person who posted this link on FB. Thank you.

More on the politics of the group: Liberals find comfort level in ‘NPR of gun clubs’ – SFGate.

Here’s a transgender feature film that you’d be thrilled that you watched: “Lexie Cannes” http://www.amazon.com/gp/product/0963781332   Or via PayPal: http://www.lexiecannes.com/id13.html

Like Loading...
‹ (Update) Bogus ‘anti-transgender’ story in the Toronto Star
Border cops in Israel arrested after attack on trans woman ›