THE GUERRILLA ANGEL REPORT — (Update: Jan. 10, 2014: Resolution passes! See below.) Kristopher Sharp’s path to the University of Houston’s Student Body Vice President seat was anything but uneventful. He was viciously attacked for his HIV status as well as his sexual orientation — incidents that clouded the campus — so when he was eventually elected, pushing for diversity and inclusion topped his agenda.

First, Sharp quickly established a LGBT resource center on campus, then set January 10th for a student government vote on a resolution to be the first school in Texas with gender neutral restrooms. Sharp appears to already have the majority of the votes needed for passage in hand. If approved, the resolution goes to the university administration to act on.

Sharp says ‘horrific stories’ from transgender students along with a history under serving these students triggered his drafting of the resolution.

Read this excellent article Sharp wrote last year following the suicide of a student who was bullied — an incident that collided with his own experience of being bullied during his election campaign — triggering his own thoughts about life, and death. Ultimately he found a ‘renewed sense of life, and promising to use it to fight for people who don’t have a voice’: http://www.lgbtqnation.com/2013/07/for-carlos-vigil-whose-fate-could-have-been-my-own-rest-in-peace-my-friend/

“The resolution to designate two bathrooms (one male, one female) in each of UHD’s three buildings as gender neutral restrooms open to anyone passed unanimously on a 7-0 vote.

“This is an important step in UHD’s mission to include diversity and inclusion at the cornerstone of everything that we do,” said VP Kristopher Sharp. “With a unanimous passage by our Senate, this truly shows how important this issue is to the UHD community.”

The unanimously passed SGA proposal now goes to the UHD administration, which is expected to approve it.” 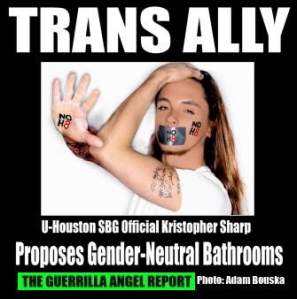