Defense attorney: ‘trans victim not in the higher end of the community’

THE GUERRILLA ANGEL REPORT — At the sentencing hearing for Rasheen Everett following his conviction of murdering NYC trans woman Amanda Gonzalez-Andujar, defense attorney John Scarpa argued that the victim was a lessor human being:

“A sentence of 25 years to life is an incredibly long period of time judge. Shouldn’t that be reserved for people who are guilty of killing certain classes of individuals?  Who is the victim in this case? Is the victim a person in the higher end of the community?”

The judge in the case didn’t buy the argument. Queens Supreme Court Justice Richard Buchter handed down a 29-year sentence for Everett.

Buchter: “This court believes every human life in sacred, it’s not easy living as a transgender, and I commend the family for supporting her.”

Gonzalez-Andujar was strangled in her NYC apartment in 2010. Everett was arrested in Las Vegas 2 weeks later and was convicted last month: https://lexiecannes.wordpress.com/2013/11/10/killers-of-trans-women-in-nyc-and-cleveland-convicted/ 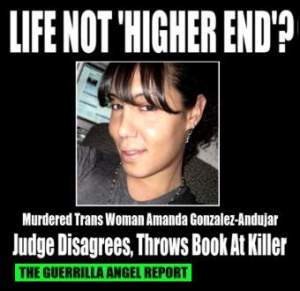