THE GUERRILLA ANGEL REPORT — A mere few weeks after a publicly assuring the transgender community that their face recognition technology was unlikely to unintentionally out trans people, UK retailer Tesco finds itself having to explain how their employees were outing transgender customers for over a year — posting online, photos and videos captured of trans people shopping.

After uploading to social media, the people in the photos were ridiculed and mocked with commentary ranging from “tranny” to “can’t stop laughing at it”. Reports say at least three Tesco employees were involved and they worked at the Arthur’s Quay, Limerick location.

Tesco says they feel ‘let down’ by this behavior and stated they’d take appropriate action if needed following a full investigation. The videos and photos are reportedly now offline.

If it took Tesco a year to figure out that their own employees where mocking trans customers, it pretty much makes ridiculous Tesco’s recent assurances that usage of the upcoming face recognition technology is unlikely to harm trans customers.

More on the impact on trans people by Tesco’s face recognition scheme: https://lexiecannes.wordpress.com/2013/11/07/face-recognition-technology-dangerous-implications-for-trans-people/ 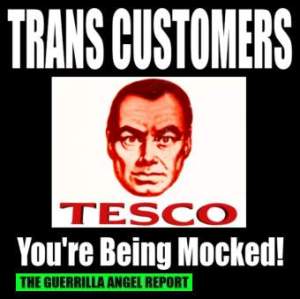