THE GUERRILLA ANGEL REPORT — Following the death of singer Lou Reed — widely known in the transgender community for his 1972 trans-themed song “Walk on the Wild Side” — trans singer Laura Jane Grace was asked about her thoughts on Reed for the UK’s Channel 4 News:

“His song about Candy Darling was one of the first times I’d heard someone sing about a trans person, and romanticize it too. Any time a trans person is mentioned culturally, and isn’t the butt of a joke, it’s a good thing. Just having it there in the public consciousness is a good thing.”

Lou Reed was close friends with trans actress Candy Darling and other trans people during a period when sexual ambiguity and being androgynous was cool in popular culture, especially music. But the actual lives of transgender people during that time was nearly horrific. For those out at the time, artists like Reed and David Bowie served as inspiration and role models, during a time when next to none existed.

If you lived in the ’70s, this was one of the few things you could hang on to. 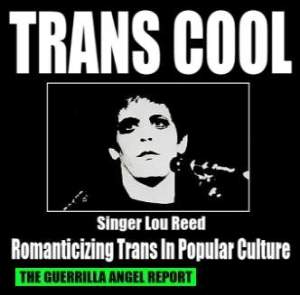 Here’s a transgender feature film that you’d be honored to watch, “Lexie Cannes”: http://www.amazon.com/gp/product/0963781332   Or via PayPal: http://www.lexiecannes.com/id13.html