Shortly after her support for the petition became known, she was suspended with pay. Later, she aligned with Tony Perkins of Family Research Council — a known hate group according to Southern Poverty Law Center (SPLC) — in a press conference. McCaskill, however, was eventually returned to her CDO post by the university’s president.

I’ve commented on this matter a number of times. Here’s a quick refresher:

The anti-gay marriage petition is a public document. Sign it, and your name becomes a matter of public record.

McCaskill praised Tony Perkins of the Family Research Council in a press conference — a bigger blunder than the signing an anti-gay marriage petition.

From Wiki on Perkins:

“In 2010, the Family Research Council—under Perkins’ leadership—was classified as a hate group by the Southern Poverty Law Center which characterized the group as “a fount of anti-gay propaganda . . .”

Here’s what the SPLC says about the Family Research Council:

“. . . its real specialty is defaming gays and lesbians. The FRC often makes false claims about the LGBT community based on discredited research and junk science. The intention is to denigrate LGBT people in its battles against same-sex marriage, hate crimes laws, anti-bullying programs . . .”

McCaskill is an African American. Yet a quick Google search reveals that Tony Perkins has a dubious relationship with black people. From Wiki:

In 1996, while managing the U.S. Senate campaign of Woody Jenkins against Mary Landrieu, Perkins paid $82,500 to use the mailing list of former Ku Klux Klan leader and state representative David Duke. The campaign was fined $3,000 for filing false disclosure forms in a bid to hide the payment to Duke. Perkins has stated he did not know about the mailing list’s connection to Duke.

On May 17, 2001, Perkins gave a speech to the Louisiana chapter of the Council of Conservative Citizens, a white supremacist group that has described black people as a “retrograde species of humanity.” Perkins claimed not to know the group’s ideology at the time, but it had been widely publicized in Louisiana and the nation, just two years earlier. The Duke incident surfaced again in the local press in 2002, when Perkins ran unsuccessfully for the U.S. Senate.

Black people are a retrograde species of humanity? Really? One wonders how a chief diversity officer can fail to check the backgrounds of people they are going to support on national television? Perkins and McCaskill apparently have in common the inability to vet the people they’ve come to support. In short, they deserve each other.

My previous article on this matter: https://lexiecannes.wordpress.com/2012/10/16/gallaudets-chief-diversity-officer-thanks-tony-trans-people-are-men-dressed-in-drag-perkins/

When the story first broke: https://lexiecannes.wordpress.com/2012/10/15/courtney-odonnell-major-ruckus-erupts-after-gallaudet-university-chief-diversity-officer-signs-anti-gay-marriage-petition/

Full details on Tony Perkins from the SPLC website:: http://www.splcenter.org/get-informed/intelligence-files/groups/family-research-council 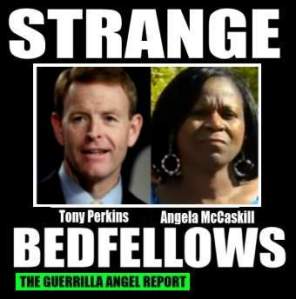 Is it time to see a great trans feature film? You bet! — Get the award-winning film Lexie Cannes and help cover GAR expenses: http://www.amazon.com/gp/product/0963781332   Or via PayPal: http://www.lexiecannes.com/id13.html